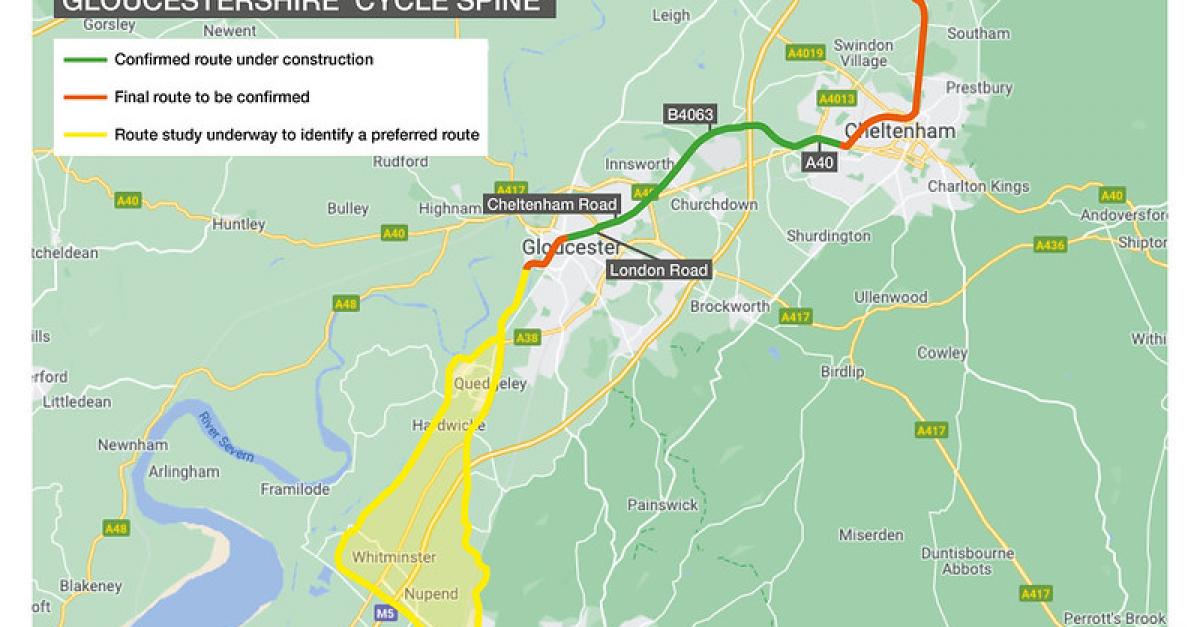 The delivery of the G2C project aims to increase cycling in a shift to active travel which will support Gloucestershire’s Local Transport Plan’s (LTP) carbon reduction pathway to reach net zero by 2045 by:

●  Increasing the accessibility of cycling to people of all abilities and physicality, increasing, and encouraging the uptake of active travel methods

●  Reducing traffic congestion on roads and overcrowding on Gloucestershire’s most popular bus routes.

It has long been considered that the lack of a safe, clear, fast, and direct cycle way between Gloucester and Cheltenham has been a barrier to economic, environmental and wellbeing growth in the area. They are the two main economic hubs in Gloucestershire and therefore draw in substantial numbers of commuters, in turn generating significant congestion and pollution. Currently there is no route for cyclists, as the A40 linking Cheltenham and Gloucester is unsafe for cyclists due to its major segregated junctions and high traffic volumes and speed. Providing a high-quality route for cyclists and walking along the existing B4063 which runs parallel to the A40 will, for the first time, provide a viable fast, convenient, and safe route for cycling between Cheltenham and Gloucester.

More recently, the global pandemic has impacted on young people with access to education sites a particular concern; Gloucestershire University and Gloucestershire College are separated from their halls of residence along the route providing limited options without access to a car. Gloucester also has the highest number of residents with a long-term health problem or disability (40,563 people) in the county; there are very limited active travel options for this group that are disability compliant.

Gloucestershire County Council’s ambition is to create a Gloucestershire central cycle spine route, connecting the National Cycle Network (NCN) routes 41 and 42 in the south-west of Gloucester, through Gloucester City Centre to the north of Cheltenham. C. £30million has been secured in relation to the wider cycleway corridor between Gloucester and Bishops Cleeve, via Cheltenham, as highlighted on the proposed Gloucestershire ‘Cycle Spine’ map (Figure 1). As more funding becomes available in the future, the cycle spine will be extended further south towards Stroud. In total, the route will provide 26 miles of continuous facility extending through the county’s most populous Central Severn Vale corridor, linking areas of growth, employment, transport hubs and education.

The new Gloucester to Cheltenham (G2C) cycle spine will re-route NCN’s existing route 41 to Cheltenham and extend past Cheltenham Spa Station. It is the key cycle commuter corridor offering direct access to employment, education, and training hubs. This high-quality cycle route will be suitable for cyclists of all ability and physicality providing quicker journey times for cyclists than can be achieved by bus and at peak times by car.

The proposed G2C cycle route (Figure 1) runs along the B4063 and currently has a mixture of on-road cycle lanes and off-road paths. The G2C route will predominantly provide continuous off-road segregated cycle track facilities with exception at extreme pinch points. It will also maintain appropriate gradients and give priority to cyclists at side roads adjoining the cycle route. Beyond physical changes for the G2C route, speed reduction is being brought in line with road safety policy for vulnerable users. The current speed limit varies between 30mph and 50mph with a view to reducing to 30mph over the entire route.

The Gloucester to Cheltenham cycle spine (B4063) started as a National Highways’ (formerly Highways England) project, following several fatal and serious cycle collisions on the A40 corridor. A study was undertaken in 2015/16 to assess the most continuous, direct, comfortable, safe, and attractive route for cyclists of all abilities and the B4063 was selected as the preferred route. National Highways completed the preliminary design of the route and passed this work onto Gloucestershire County Council to develop further.

As detailed design progressed in the 2020/21 financial year in context of new national cycle infrastructure design guidance (LTN1/20), an open rigorous audit of the G2C scheme supported by Brian Deegan of Urban Movement and Sustrans was undertaken. In addition, a comprehensive public engagement exercise on the Eastern half of the route was undertaken in spring 2021 to inform the delivery of the scheme. Consultation on the western half of the route is to follow later in 2022.

Construction of the core section of the G2C cycle spine commenced in late 2021. The construction is set out in two sections with extended schemes as shown in Figure 1. Section 1, completed in 2021, is the Gloucester City to Elmbridge Court Roundabout route and Section 2 is a phased approach currently under construction eastwards from Elmbridge Court Roundabout, Gloucester to Arle Court Roundabout Cheltenham will tie in with the works currently constructed as part of the West Cheltenham Transport Improvement Scheme (WCTIS) to facilitate the emerging Cyber Central proposal and 45 hectares of employment land. These works include walking and cycling improvement investments which have extended the G2C cycle spine to Lansdown Rail Bridge; with further investment planned, this will provide direct linkage to Cheltenham Spa Railway Station.

C. £30million has been secured in relation to the wider cycleway corridor between Gloucester and Bishops Cleeve which includes the sections of G2C project as highlighted in the proposed Gloucestershire ‘Cycle Spine’ Route (see Figure 1).

●  The G2C cycle spine started as a National Highways (formally Highways England) project as a designated funded cycle scheme with the strategic aim to link the major areas of Gloucester and Cheltenham and the villages in between.

●  A series of ring-fenced funds have been designated by National Highways to invest in cycle infrastructure, including for this route.

●  National Highways heavily supported the scheme by contributing to design costs and will contribute further to construction costs subject to a value for money assessment. These works will support accident reduction on the National Highways Strategic Road Network.

●  The County Council has collaborated closely with Sustrans, the national walking and cycling charity, who have been a critical friend on the design of the route, which has ensured high cycle design compliance throughout and Sustrans will be providing a contribution to the scheme that will ultimately replace the existing NCN 41 route.

●  The North and Northwest of Cheltenham is a key development site in the County and therefore has brought in significant financial contributions for cycling facilities. Development in this area has also led to increased cycle demand, for example between Cheltenham and Bishops Cleeve.

○  Capital monies have been secured to contribute to scheme delivery and ATF has ensured that this cycle infrastructure project was reviewed and designed to the newest national cycle design standard (LTN1/20) released in 2020.

○  Revenue funding will ensure planned promotional activities to focus on the G2C cycle spine on the B4063 with a strong capital investment in active travel infrastructure.

The funding gap is being sought through other suitable funding sources, including:

●  The design of the scheme was supported by Brian Deegan and Sustrans, as well as residents via a comprehensive public engagement exercise.

●  The scheme has received significant political support. Alongside this, written support has been secured from district councils, transport providers, Sustrans, educational establishments and the Gloucestershire NHS Trust.

●  Ongoing community and business engagement is underway, also supporting the monitoring and evaluation of the project.

The delivery of the G2C project aims to increase cycling which will support Gloucestershire’s carbon reduction pathway. Gloucestershire’s LTP sets a target to reduce per capita transport carbon emissions to zero tonnes by 2045. While tonnes of CO2 per person in the county were rising, the rate of increase is declining and has begun to reduce in 2018, as monitored in the Gloucestershire LTP annual progress report.

Whilst the G2C cycle spine scheme is a standalone scheme, it will provide the initial building block of a comprehensive cycling network across the county. The scheme will directly link to the West of Cheltenham Transport Improvement Scheme (WCTIS) that is currently being constructed and which benefits GCHQ and the proposed Cyber Central development, with its 1,100 new homes and 7,500 jobs. A further c. 575 homes are planned in other developments along the route. In total, the adopted Joint Core Strategy (Gloucester/Cheltenham/Tewkesbury district authorities) identified c.9,000 homes and c. 100 hectares of employment land in the strategic allocations for the North-West and West of Cheltenham. Gloucestershire County Council is also proposing improvements to Arle Court Transport Hub (ACTH - formerly Arle Court Park and Ride), in Cheltenham, to expand bus services and to improve facilities on site and connections to the walking and cycling network.

The immediate impact of the G2C route will be the delivery of the linchpin to a number of supporting cycle infrastructure projects linking the two major urban centres in Gloucestershire.

●  In the longer term, the G2C new cycle spine will provide further opportunities for investment in active travel corridors in the County.

●  Currently, the Propensity to Cycle Tool shows low levels of cycling across Gloucestershire, with between 4-6% of commutes by bike. But with development of the G2C active travel corridor a significant growth to 15% to 29% is forecasted under the Go Dutch scenario.

●  Gloucestershire anticipates that the positive impacts of the G2C project are transferable and can be adapted to grow a cycle network, increasing levels of cycling for all. For example, the G2C project links to a proposed mini-Holland project (subject to funding) where the Propensity to Cycle Tool currently shows low cycling numbers across the areas, approximately 4-9%. Under the Go Dutch scenario these areas are forecast to increase commuters equating to a 15% to 472% increase, demonstrating that there is latent demand that can be unlocked.

The G2C project (B4063) is a permanent intervention that will see the creation of a continuous corridor of walking and cycling facilities for all abilities along the B4063 between Cheltenham and Gloucester. It includes the reallocation of road space, improvements to existing facilities, signal improvements and other interventions. By creating a central spine of continuous active travel infrastructure between Cheltenham and Gloucester, it will create the backbone of Gloucestershire’s emerging walking and cycling network and reduce congestion on one of the busiest urban corridors in Gloucestershire, thus reducing overcrowding on Gloucestershire’s most popular bus routes.

The initial design fell short of revised new national cycle design guidance and was reviewed with support from an independent audit from industry expert Brian Deegan of Urban Movement and Sustrans to meet LTN1/20 cycle infrastructure design guidance (issued by the Department for Transport) and align with the recently adopted Gloucestershire’s LTP cycle policy, thus, the revised proposals now boast a high level of compliance and public support.

The lessons from the project have primarily centred around providing the highest quality compliance possible inside the constraints of the existing highway boundary and reallocating as much space from the road without comprising public transport. The creation of this route will lead to significant growth in active travel in Gloucestershire, with the aim of extending the spine and creating a number of routes which extend from the cycle spine to create a cohesive cycle network. 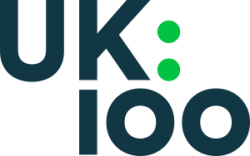