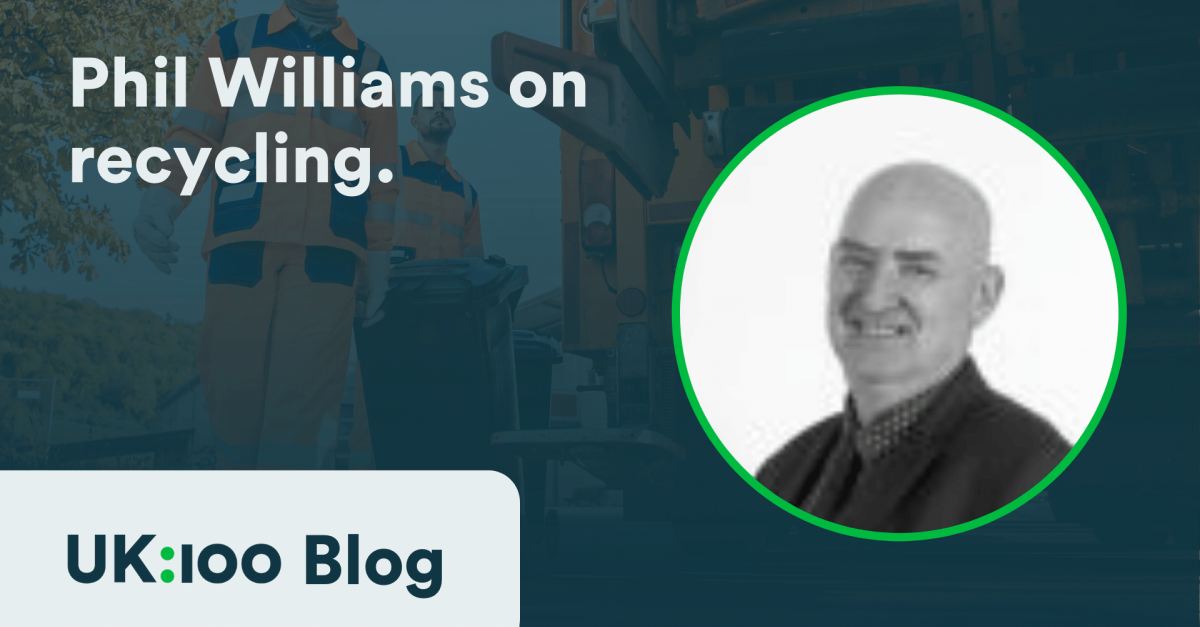 Local Powers
Reflecting on last year's achievements, Cllr Phil Williams explores how Three Rivers District Council has managed to achieve one of the highest recycling rates in England at 63.1% in 2020/21.

Following the publication of Defra’s second progress report on the Resources and Waste Strategy, Cllr Phil Williams, Lead Member for Environmental Services, Climate Change and Sustainability, explores how one of UK100’s newest members, Three Rivers District Council, has managed to achieve one of the highest recycling rates in the country, 63.1% in 2020/21.

“It’s great to be leaders of recycling in England and able to share what we have found to work well with others to help people up and down the country recycle and compost more. A long history of service charges, working in partnerships with other Council and organisations, and the efforts of Officers and residents has led to this fantastic achievement and increasing recycling rate”.

This blog will discuss three ways in which we have achieved a high recycling rate at Three Rivers District Council:

Achieving a greater consistency in collection, for both range of materials and service standard, are key proposals in the Defra Resources and Waste Strategy aimed at improving household waste and recycling rates. Following the Consistency in Household and Business Recycling Consultation 2021, plans to make weekly food waste collections a statutory requirement by 2023/24 were confirmed as the UK has pledged to have zero food waste by 2030. At present, only 35% of households in England are required to own a food caddy, including Three Rivers District Council. Our Council has noticed an 11% increase in recycling rates since 2014 when we introduced separate food waste collections from garden/bio waste, as well as a 43kg reduction in waste per household.

Whilst there is evidence to suggest mandatory services will improve food waste collection with an estimated increase of 1.35m tonnes by 2029, the government is also considering mandating a minimum standard service provision and collection frequencies. Three Rivers District Council has found that by providing a smaller 140-litre refuse bin, in combination with fortnightly (as opposed to weekly) refuse collections which began in 2011, they have seen further improvements to recycling and food waste performance. From 2011 there has been a 12% increase in their overall recycling rates (both dry recycling and composting), whilst the national average has increased just 2%.  Moreover, key to our success has been the use of in-house contracts for waste management collection, allowing us to quickly and flexibly adapt our service to support residents in best practice changes.

Whilst Defra has stated a preference for the provision of free-of-charge garden waste services in the future as part of the Resources and Waste Strategy, Three Rivers District Council provides a fortnightly chargeable service. Given the high garden rates (79% of eligible properties) in this fairly affluent, rural area, this service works well, with no evidence to suggest that removing the cost and increasing regularity of service would improve service uptake. Therefore, Three Rivers demonstrates the importance of the council’s role in understanding the local context of an area and how to respond flexibly to the needs of its residents when implementing changes to improve its service and recycling rates.

There are over 300 different recycling schemes in England, with accepted materials varying drastically between different local authorities. Unsurprisingly, an estimated 525,000 tonnes of household recycling was rejected due to contamination in 2019/20. Whilst the proposed introduction of the reformed Extended Producer Responsibility (EPR) by 2023 will place greater responsibility on producers to label packaging more accurately and pay the full cost of dealing with the packaging waste they produce, this will prove ineffective without sufficient recycling knowledge among the public and the active and sustained involvement of households in the correct separation of waste materials.

As such, Three Rivers District Council recognises the crucial role of successful communications campaigns to reduce confusion for residents and ensure the continued success of recycling programmes. The Council is a member of the Hertfordshire Waste Partnership (HWP) a partnership between the county and ten district and borough councils which aim together to reduce, reuse and recycle Hertfordshire's waste. As well as providing more consistency for residents across the county, this partnership is key for increasing capacity and resource at Three Rivers District Council, helping to avoid reinventing the wheel. The public facing group of the HWP; WasteAware lead on creating, sharing and coordinating campaigns and communications plans. Recent examples include their green Christmas and Love Food Hate Waste campaigns, which have been instrumental in growing awareness about the importance of reducing waste to preserve natural resources and reduce emissions among residents.

Additionally, Three Rivers District Council has partnered with key community stakeholders to implement a reusable period products project to reduce waste and deliver co-benefits for their wider climate emergency and sustainability strategy such as reducing period poverty and improving sewage discharge problems. For example; food banks and healthy hubs around Three Rivers are currently distributing free reusable sanitary pads and menstrual cups to residents, Hertfordshire is offering a discount scheme with 15% off a number of suppliers, and the Council is working with the local Women’s Environmental Network to create and deliver training for two teachers at every school to disseminate information and perform demonstrations for students.

Alongside support for residents, equally important are waste and recycling collection crew - so ensuring their successful training in waste separation is crucial. Three Rivers District Council’s fleet utilises Bartec, an in-cab system that allows the council to track key performance metrics such as missed bins and contamination. Should a crew member register a communal bin as contaminated, an alert is sent to dedicated enforcement officers to verify and then appropriately discuss and plan interventions with managing agents to improve the residents performance. In combination with this service, regular best practice newsletters, and annual meetings, Three Rivers District Council is able to continually optimise the service and skills of its collection crew in order to increase its recycling rates.

In summary, Three Rivers District Council has identified ways of working more collaboratively to make services and communications more effective to make it easier for households to improve the quality and quantity of materials collected for recycling whilst reducing waste. Yet, in order to build on this progress, to go further and faster than the national targets, Three Rivers District Council, like most other councils, keenly await the long delayed timetable and funding for the expected changes to delivery in the Strategy.

Do waste electricals have a key role to play in the UK’s progress towards establishing a circular economy and cutting CO2 emissions?