Half-a-century on from 'The Limits to Growth', behold the 2022 Growth Plan 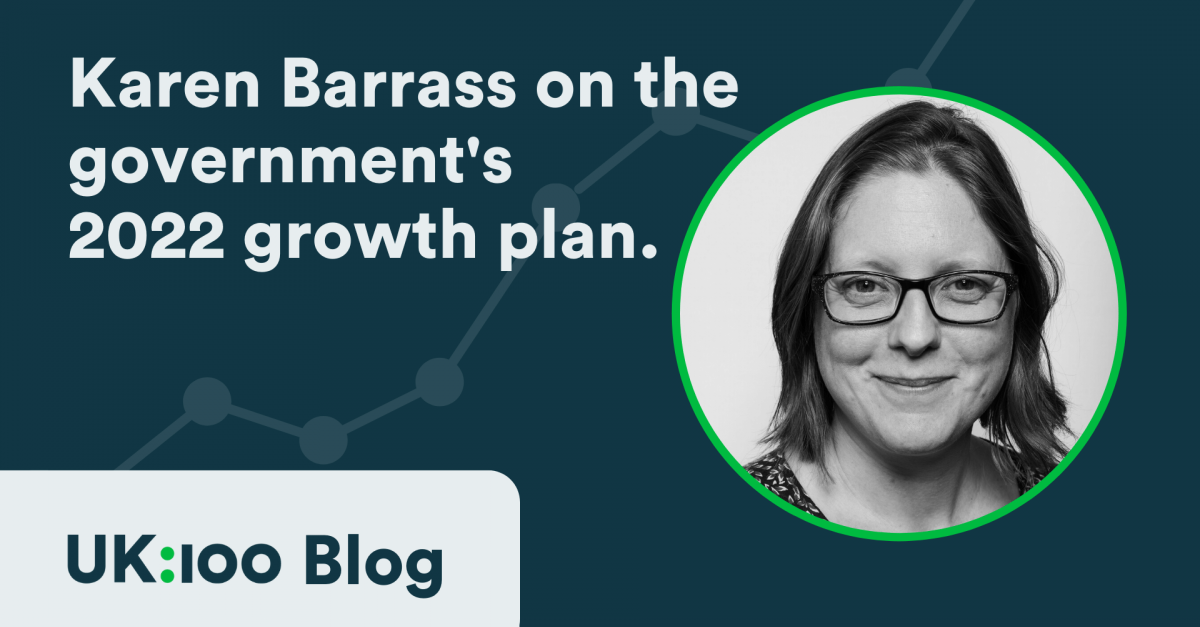 Local Powers
The new Chancellor's "Growth Plan" unveiled earlier this month coincides with the fiftieth anniversary of the influential — and controversial at the time — The Limits to Growth report.

The new Chancellor's "Growth Plan" unveiled earlier this month coincides with the fiftieth anniversary of the influential — and controversial at the time — The Limits to Growth report.

In 1972, scientists ran a computer simulation to better understand the interactions between people and the environment. The resulting report — The Limits to Growth — concluded that with continued consumption of natural resources, "the most probable result will be a rather sudden and uncontrollable decline in both population and industrial capacity." The report gained more attention when 1973's OPEC oil crisis highlighted the stark reality of the model’s projection — our markets are volatile, resources are scarce, and they can dry up.

It was another 20 years before the global community agreed the concept of ‘sustainable development’ should be a guiding principle at the Rio Earth Summit in 1992. The summit agreed that servicing our needs should be balanced against protecting those of future generations.

Whilst it’s been a long road, we have made significant strides in the past half-century. In 2021, the UK had almost halved its greenhouse gas emissions compared to 1990 levels. Britain was among the first global economies to commit to a mandatory target to reach Net Zero by 2050, and local authorities across the land have pledged, as UK100 members, to be even more ambitious. The Glasgow Pact, agreed during the UK's presidency of COP27, recognised that ‘limiting global warming to 1.5 °C requires rapid, deep and sustained reductions in global greenhouse gas emissions.’ It compelled global leaders to accelerate action in this ‘critical decade.’ Consequently, the UK has been in a world-leading position, with sustainable development a clear guiding principle. The Glasgow Pact mentions sustainable development 19 times.

Fast forward to the new Government’s 2022 Growth Plan. It represents a bold departure from years of economic orthodoxy. But a departure that risks a significant undoing of the progress made in the past year, decade, half-century. Until we get the finer details promised for the next "fiscal event," we’re left fearing the plan will see the brakes slammed on positive Net Zero action and sustainable development.

There are three key areas where this is most evident. There are 86 new road-building projects announced in the growth plan. Whilst an additional 16 local transport projects are welcome, the 2021 Transport Decarbonisation Plan made it clear that the country needs to finally move away from a ‘predict and provide’ edict toward a ‘vision and validate’ model. The reprioritisation that the new plan signals is dangerous and shortsighted. The Government’s latest figures highlight that traffic levels are still below pre-pandemic levels on all roads. A fact we should lean into when we need to continue to shift away from private cars and road-based freight to drive Net Zero action.

The Growth Plan is a bold response to a global crisis and its effects on the UK economy. The Russian invasion of Ukraine has impacted fuel supplies and security across Europe. But how does the UK's response to the gas crisis compare? In Germany, where the crisis has seen inflation levels pushed up on a scale comparable with the UK, the Government unveiled a €177.5 bn billion Climate and Transformation Fund, an economic modernisation plan designed to protect Germany from climate change between 2023 and 2026. The fund includes a €51 billion investment on energy efficiency measures over the next three years. It's a plan which recognises the short-term crisis while making long-term plans to ward off future energy crises.

And there's an — as yet unrealised — opportunity for the UK government to do the same. Liz Truss's Government has invested huge sums in easing the short-term crisis but hasn't yet invested in a long-term plan to prevent this situation from occurring again in a few years' time.

Whilst the Growth Plan outlines the next phases of already committed-to funding for energy efficiency, there is no renewed or extended commitments to the kinds of interventions that would be effective in countering high prices while reducing emissions. Britain too should be insulating our leaky housing stock and unlocking the full potential of a flexible, clean energy grid by investing in transforming the energy system and deploying local area energy plans to make place-based clean energy the norm.

Instead, the Government has focused on a renewed dash for gas, lifting the moratorium on fracking — despite the scientific review and latest polling offering no indications it is any safer or popular than when it was banned. At the same time, the plan incentivises oil and gas firms to squeeze every last drop out of the North Sea.

The move is out of kilter with The Climate Change Committee's progress report to the Government recommended action to address the rising cost of living be aligned with Net Zero. To do that, it argued that the UK needs to see a faster shift away from fossil fuels. The report asserts that current high fossil fuel prices give a greater incentive to accelerate the transition away from (rather than towards) fossil fuels, identifying energy efficiency and heat pump roll-out in the buildings sector as some of the areas with the most potential. Finally, it stated that: “It is important that efforts to ameliorate consumer costs do not entrench existing use of fossil fuels.” The Growth Plan runs counter to the advice of the independent experts.

But it's not all gloom. The Growth Plan recognises the potential of one of the cheapest and most plentiful energy sources; onshore wind. It overrides the 2015 Written Ministerial Statement that effectively banned the expansion of onshore wind in the UK. It states that: “The government will unlock the potential of onshore wind by bringing consenting in line with other infrastructure.” We’ve missed out on almost a decade of onshore wind development and lifting the ban should be wholeheartedly welcomed. However, there's a bit of constructive ambiguity in the sentence we are, for now, treating with caution.

The British Energy Security Strategy indicated that there would be community engagement on the deployment of onshore wind - a pledge dropped by the Growth Plan. We should be vigilant against the positive onshore wind development being allied to a plan to take agency away from local authorities.

In his speech delivering the Growth Plan, Kwasi Kwarteng mentioned neither ‘climate’, ‘green’ ‘environment’, ‘sustainability’ nor ‘Net Zero’. This was ten months on from Glasgow when the Prime Minister said to global delegates convened at COP26:

“The longer we fail to act, the worse it gets and the higher the price when we are eventually forced by catastrophe to act because humanity has long since run down the clock on climate change.

It’s one minute to midnight on that doomsday clock and we need to act now.”

Fifty years ago, we were warned by The Limits to Growth report of a sudden and uncontrollable decline if we prioritised short term gain over long term prosperity. Fast forward to summer 2022, and Britain saw wildfires and temperatures reaching a record high of 40 degrees in London.

The Growth Plan needs some tweaks. To put it mildly. Ultimately, we don't want our leaders playing with fires. We'd rather they focus on putting them out — especially as the climate, cost-of-living and energy trilemma blazes on.

Accelerating the Rate of Investment in Local Energy Projects

Oh for a five-year settlement: the need for a LAEP forward in local energy planning